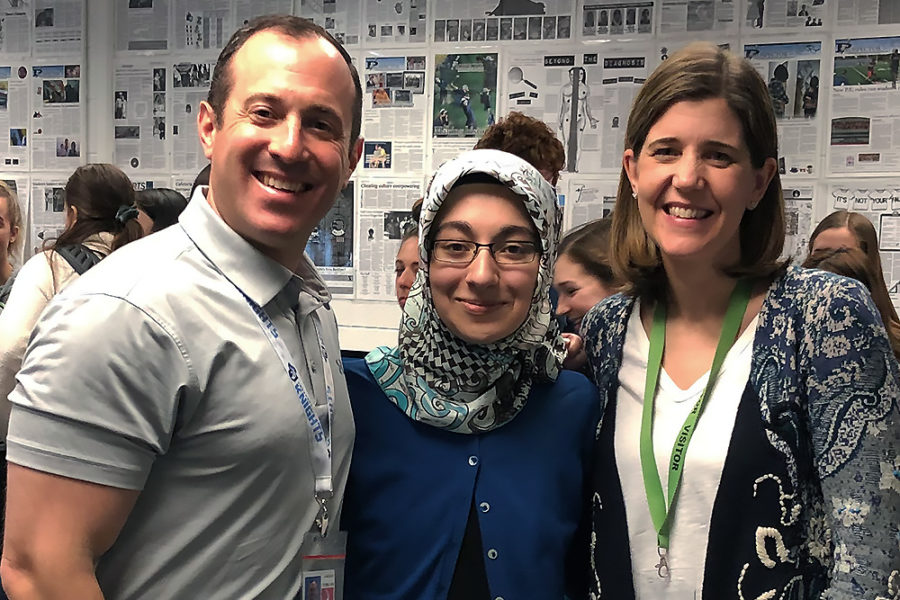 She is IJEA’s 30th Journalist of the Year since 1989 and the first Prospect student to be named the state’s top high school journalist.

Ayse serves as editor-in-chief of the student newspaper, The Prospector.

Jason Block is her journalism teacher and The Prospector’s faculty adviser.

The award, the highest individual student honor given each year by IJEA, comes with a scholarship. Ayse now advances to compete against other state winners for the national title.

IJEA State Director Brenda Field visited Ayse in her journalism classroom Feb. 28 to surprise her with the news that she had won. Family members and Prospector colleagues were present for the announcement — and everyone enjoyed a piece of celebratory cake.

Ayse earned the award based on a portfolio of work that she put together from her four years in Prospect’s journalism program. She also submitted a personal essay, transcripts and letters of recommendation.

“For me, journalism means truth-telling and analyzing that truth to help others understand why it matters,” Ayse wrote in her essay. “The average person doesn’t have the time or ability to know what’s happening every moment of the day across the globe, nor do they always know how it affects them. That’s why journalists entertain the impossible by conveying that information to the world.”

Highlights of her portfolio included stories on Turkish immigrants coming to Prospect and in-depth explanatory coverage of a District 57 referendum.

Judges also noted the professional quality of her editing skills and the outstanding leadership she has provided her school newspaper.

“I was so impressed,” said IJEA President John Gonczy, journalism adviser at Marist High School and one of the judges. “In Ayse I saw a degree of humanitarianism and a concern for those kinds of issues that I have rarely seen.”

Gonczy continued: “Her approach is not overbearing, not preaching, not trying to shove a point of view down anyone’s throat. I saw a warmth and optimism. She comes to journalism with a background of tremendous involvement. From her portfolio to her cover letter to her letters of recommendation, it is abundantly clear that everyone who has worked with her has been touched by someone who really comes from a good place.”

Ayse will now represent Illinois in the national Journalist of the Year competition in April.

The national award is given by the Journalism Education Association. The winner will be announced at the Spring National High School Journalism Convention sponsored by the JEA and its partner, the National Scholastic Press Association. The convention will be held in Anaheim, Calif., April 25-28.

Last year’s Illinois Journalist of the Year, Natalie White of Downers Grove North High School, was named one of six national runners-up in the JEA’s 2018 contest.